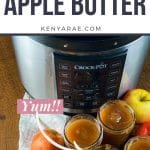 Sweet and tangy instant pot apple butter made quicker than it’ll take you to run to the store to grab some.

I am starting to forget I am northern born with all the southern home cooking I have been doing lately.

I remember when I was up north and would buy Apple butter from the Amish or when I had breakfast at Cracker Barrel, friends would be like what is that???

I’d have to explain to them, the fact that they didn’t know meant they were completely missing their blessings.

Apple butter, while not buttery in the least,  and doesn’t even have a drop of butter in it, is so good on biscuits, toast, muffins and more.

I particularly love it on any biscuit I make.

As a matter of fact, it was the first thing I ventured to make when I got my instant pot.

I gave away all but our one jar and my family was not happy because it did not last long.

I’m thinking your family will feel the same. So let’s make Apple butter shall we??

How To Make Apple Butter In The Instant Pot

Start by washing the apples off.  Then slice the apples to remove the core, leaving the peel on.

I do this with my apple core thing. Which makes it really simple and easy.

Put the water and all the apple slices in the instant pot and cook on high pressure for 20 minutes.  I use the steam function on mine. But all models have different functionality.

Do a ten-minute natural release and then release the remaining steam if any is left after that.

Add in the nutmeg, cinnamon, and cloves and puree them together with apples using a hand mixer until it’s smooth.

If you don't have a hand mixer, you could put the apples and seasoning into your blender and pulse it.

If the mixture is too thin, you can switch it to the sauté function (or add it back in the instant pot if you used your blender) on low, stirring occasionally until it’s thick enough to your liking.

What can I eat apple butter on?

Sweet and tangy apple butter made quicker than it’ll take you to run to the store to grab some.

As an Amazon Associate and member of other affiliate programs, I earn a comission from qualifying purchases.