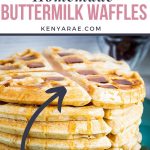 Instead of buying frozen waffles from the grocery store, make these homemade buttermilk waffles for breakfast!

Waffles from the store tend to taste a bit bland – without syrup or whipped cream, there’s not much to them. When you make them at home, you can add cinnamon to make each waffle more than just a syrup platter.

You’ll also be using ingredients with no artificial colors or flavors, which is something that isn’t guaranteed in the freezer aisle at Wal-Mart.

If you’re not already making waffles at home, now is a great time to start!

How To Make Homemade Buttermilk Waffles

Start out by seperating your egg yolks and whites.

Using a stand or hand held mixer, beat the egg whites until you have stiff peaks form, and adding in the sugar towards the end.  Set egg whites aside.

In a seperate bowl, mix all the other ingredients.  Make sure to not over-stir. 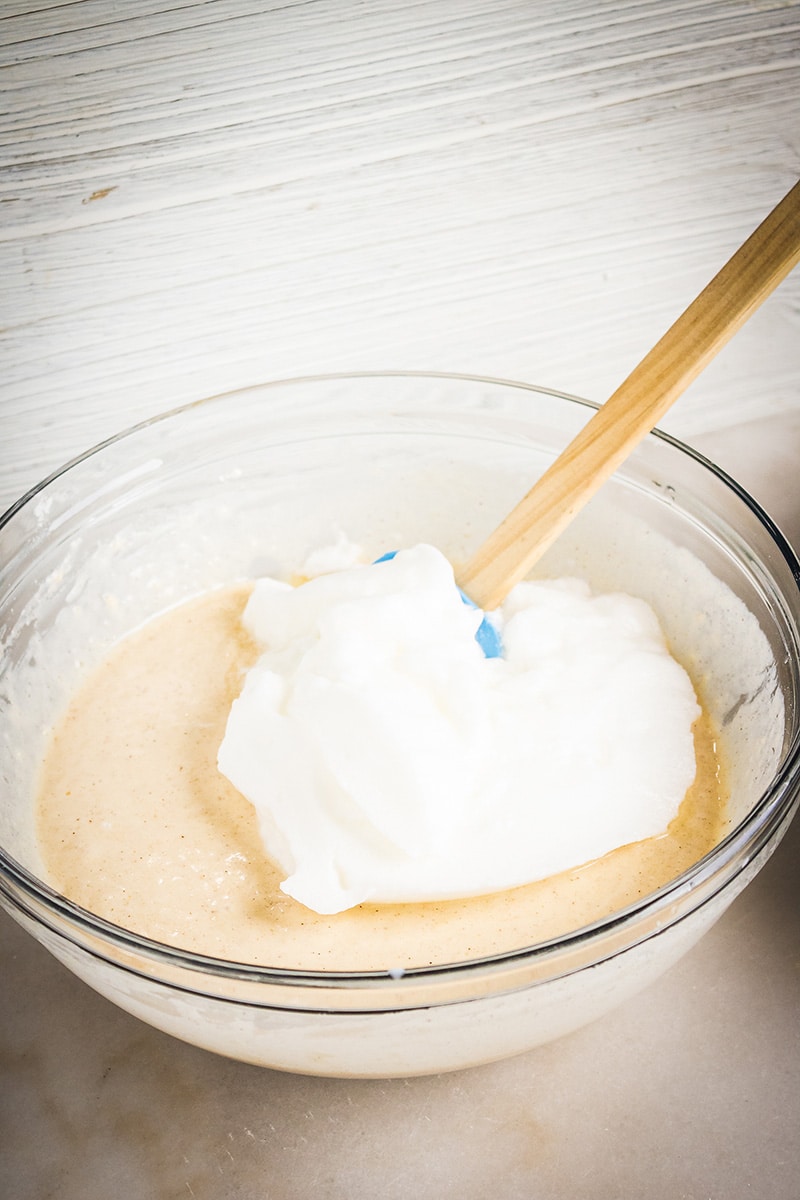 Once everything is all mixed together, fold in the whipped egg whites.  Do this with a spatula until the egg whites are just incorporated into the batter.

Cook your waffles in a waffle iron according to waffle iron instructions.
Enjoy, topped with your favorite toppings.

What Makes These Waffles Both Crisp and Fluffy At The Same Time?

No one loves a soggy waffle.  So this recipe delivers the perfect combination of fluff and crispness you expect from a waffle fresh out the maker.

The buttermilk reacts with the baking soda to help the waffles rise, and then high heat of the waffle iron makes every corner, nook and cranny of the waffle nice and crisp.

What’s the Best Waffle Iron to Use?

To make buttermilk waffles at home, you’ll need a waffle iron. If you don’t already have one, you can buy one for under $20. Cuisinart makes a standard waffle iron for chefs on a budget, but those who have a bit more to spend could try this Hamilton Beach appliance. This waffle iron lets you easily flip your waffles, and it comes with a drip tray.

If you buy a mini waffle iron, you can make more than 6 servings. The Dash Mini Maker costs just $10, and you can get a Mickey Mouse waffle iron for $15. The Mickey waffle iron is great for kids and kids at heart!

Yes! Every ingredient in this recipe can be replaced with a gluten free alternative.

Some of the ingredients are already gluten free, like the eggs and cinnamon. Just make sure you’re using whole eggs, and you may want to consider grounding your own cinnamon to avoid the risk of cross contamination. Some ground cinnamon is rolled with flour!

Believe it or not, most baking powder is already gluten free.

Can I Make Vegan Buttermilk Waffles?

You can make these waffles vegan, too! Use Ener-G Egg Replacer instead of eggs, and Earth Balance Organic Buttery Spread for your butter. You’ll have to make your buttermilk replacement by hand, but it’s easy. Whisk some vegan yogurt into a bowl of dairy-free milk until you get the right consistency.

Alternatively, add one to two tablespoons of lemon juice to your dairy-free milk. Let it stand for 5-10 minutes before using in your recipe.

After you’ve made your waffles, you can top them with just about anything!

Use pancake syrup, banana slices, and chopped or crushed nuts to create a breakfast similar to what you’d find at Denny’s.

You can also try whipped cream, strawberry slices, and blueberries for a patriotic dish. If you’re serving these waffles for dessert, you can’t go wrong with a scoop of ice cream!

When you use a regular waffle iron, this recipe yields 6 servings. Depending on how many toppings you add, you may want to make 2 waffles per person. Have some extra ingredients on hand – you may wind up making seconds!

Waffles from the store tend to taste a bit bland without syrup or whipped cream. These homemade buttermilk waffles are anything but bland.﻿

As an Amazon Associate and member of other affiliate programs, I earn a comission from qualifying purchases.

Other Waffle Recipes You May Love:

How do you top your waffles? Take to the comments and let me know.

breakfast recipeshomemade recipeswaffle recipes
Questions, Comments or Just Want to Say Hey ????????, Drop Me a Line in the Comments.
FacebookTwitterPinterestEmail

I just love waffles! And my daughter loves them too, so this comes very handy, I need to replace my waffle maker though. Thanks for this post Kenya Rae

Meee too! on both. I could use a new waffle maker too. Gonna get me one soon! Hope you enjoyed the recipe.

Everyone needs a classic waffle recipe in their arsenal. Thanks!

Girl, how did you know I have some buttermilk to use up?! YUM! These are it for our brinner this week. Pinned, too.

I love Brinner! Thanks so much for stopping by and for sharing!

Thank you for sharing such a fantastic, from-scratch recipe! It’s the weekend so I know what will be on our table tomorrow morning!

Oh yay! I hope you guys enjoy them. We love waffles on the weekends!!